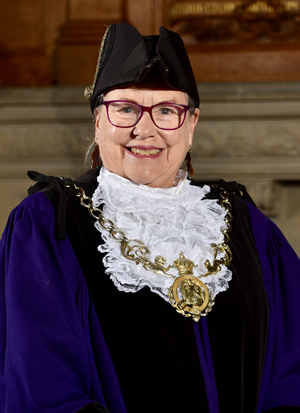 Jill has been a Councillor since 2006 but she also served nine years in the 1980s. She has always represented the community of Upton where she is also a member of the Parish Council. Jill proud to be is a member of the governing bodies at Westlea Primary School, Acresfield Academy and Upton High School.

During the year 2013 – 2014 Jill was Lord Mayor of Chester, which she says was an amazing and humbling experience and which she shared with her daughter Rachel who is her Sheriff’s Lady for this coming year. Jill lives with her three cats and two chickens and is known by her friends as a bit of a ‘mad cat lady’. When not dedicating her time to her community Jill likes to read, spend time in her garden and bake. She also loves spend time with her two granddaughters of whom she says she is immensely proud.

Cllr Jill Houlbrook’s chosen charity is Chester Pride which celebrates diversity and the lesbian, gay, bisexual and transgender + (LGBT+) community. Jill has been a long standing supporter of Chester Pride and Rachel is a member of the organising committee.